The PennEast draft Environmental Impact Statement (EIS) is too data deficient to support the Federal Energy Regulatory Commission’s (FERC’s) conclusion that the PennEast pipeline project will do no significant harm to the environment.

The United States Fish and Wildlife Service (USFWS) guidelines state that projects should “avoid permanent habitat alterations in areas where birds are highly concentrated” and cite Audubon Important Bird Areas (IBA’s) as examples of high concentration areas. The proposed PennEast pipeline transverses seven IBA’s. The draft EIS does not adequately address the impacts to these IBA’s. In previous comments on the PennEast pipeline project, WCAS urged a thorough onsite survey of each of these areas to assess what species were present and when they were present to adequately evaluate the impact of this project on birds and other wildlife in these IBA’s. Yet only a general and incomplete list of birds affected is cited in the report. A comparison of the draft EIS lists and the eBird lists for these IBA’s shows that many more migratory and breeding birds are present in the area than cited in the draft EIS.

The Baldpate Mountain IBA is both the best studied IBA affected and the most fragile. An outlier of the Greater Sourland Mountain IBA, Baldpate has the second largest expanse of contiguous forest in central New Jersey and the largest area of high quality understory but is at the low end of the size required for interior forest species and is especially susceptible to edge effect and habitat degradation due to its long, narrow shape.   Any decrease in the width of forest would have a negative effect on bird habitat. Of the 171 bird species reported on eBird as of March 7, 2017, forty-three species are breeding Neotropical migrants and eighty-one are migratory Neotropical migrants. Breeding Neotropical migrants include New Jersey (NJ) special concern breeding species Veery, Wood Thrush, Hooded Warbler, Worm-eating Warbler and Kentucky Warbler in the interior forest habitat. A Cerulean Warbler breeding territory was discovered in May 2017 on a forested slope. The Yellow-breasted Chat, an NJ breeding Neotropical migrant of conservation concern breeds in the powerline ROW. Golden-winged Warbler and Gray-cheeked Thrush are NJ special concern non-breeding Neotropical species that migrate through Baldpate. Resident birds of conservation concern documented during breeding season are Cooper’s hawk, NJ special concern breeding; Red-shouldered Hawk, NJ endangered breeding and special concern non-breeding; Barred Owl, NJ threatened breeding and non-breeding; and Red-headed Woodpecker, NJ threatened breeding and non-breeding. NJ Threatened Long-eared Owl roosts were documented from pellets under roosting trees in the winter of 2013 -2014 and spring of 2016 and seen in December 2016. NJ breeding special concern short distance migrant Brown Thrasher breeds at Baldpate in edge habitat. NJ threatened American Kestrel and NJ special concern breeding Broad-winged Hawk also have multiple Baldpate records. Additional bird species mentioned in the draft EIS USFWS Trust Resource List include breeding Neotropical migrants species Black-billed Cuckoo, Blue-winged Warbler, and Prairie Warbler, which breed in edge habitats at Baldpate; Louisiana Waterthrush, which breeds in the maze of small streams on the north side of Baldpate and along the adjacent Fiddler’s and Moore’s creeks; the Neotropical migrating species Canada Warbler; and short-term migrant and winter resident Fox Sparrow. Additional Audubon/ABC Watchlist 2014 species that migrate through Baldpate are Prothonotary and Connecticut Warblers. The eBird list contain many more species than are listed in the draft EIS.

WCAS has conducted breeding studies on Baldpate. A census of singing males from 2008 to 2016 shows the highest documented density of breeding Neotropical migrants in New Jersey. With contiguous forest and four areas of high quality spicebush understory, Baldpate is saturated with breeding Neotropical birds.  The five interior forest breeding species that are designated New Jersey species of conservation concern need a healthy understory to successfully breed. At Baldpate Hooded Warblers and Wood Thrush breed in the shrub layer, Veeries and Kentucky Warblers nest on or near the ground in dense scrub, and Worm-eating Warblers nest on or near the ground in dense scrub on a slope. Graph #1 & #2 show the number of breeding territories for these species along approximately eight mile of trails sampled in two routes. If the PennEast pipeline is built, one area of high quality Spicebush understory would be converted from interior forest habitat to edge habitat. In the first .5 mile along the White Trail from the Pleasant Valley parking lot, eight Wood Thrush territories, three Veery territories and one Hooded Warbler territory would be affected by the pipeline construction. The Wood Thrush is singled out in the State of the Birds 2016 report as one of the species in steepest decline in North America. A loss of eight breeding territories is a clear violation of USFWS guidelines. Other forest interior specialist that nest at Baldpate are the canopy nesting Yellow-throated Vireo, Scarlet Tanager, and Eastern Wood Peewee. Table #1 shows the interior forest breeding Neotropical migrants found at Baldpate. Table #2 shows all breeding Neotropical species at Baldpate, including edge breeding bird and birds that breed both on the edge and in forest gaps with denser understory. Contiguous forest with healthy understory is rare in central New Jersey due to destruction of the understory in most areas by overabundant white-tailed deer. Since breeding territories in suitable habitat in the Sourland Mountain IBA are already taken and other areas surrounding Baldpate are too small or too degraded to support these species, there is no place for these birds to establish breeding territories if the Baldpate territories are lost or degraded.

Non-avian species of conservation concern are also found on Baldpate. Two reptiles of conservation concern in New Jersey, Eastern Box turtle and Northern Copperhead, breed at Baldpate. Eight Eastern Box Turtles were found at Baldpate in the summer of 2016, two of them in the ROW, indicating a low density breeding population in the area affected by PennEast. A 2016 study by Friends of Hopewell Valley Open Space (FoHVOS) found a breeding population of northern copperheads on Baldpate. Copperheads were not mentioned in the draft EIS. A healthy population of Shagbark Hickory is found on Baldpate, with some trees slated to be clear cut for the construction of the proposed PennEast pipeline. The tree species is protected as it is the preferred roosting site of the federally endangered Indiana Bat. The draft EIS states that no critical habitats are affected but since there has not been a thorough search for the bat at Baldpate, this statement cannot be verified. Several plant species of conservation concern that have been documented at Baldpate by FoHVOS were also not mentioned in the draft EIS.

The route of the proposed PennEast pipeline cuts through the edge of the Sourland Mountain Region IBA. The interior forest breeding Neotropical migrants are the same as at the Baldpate Mountain IBA. While the area of the Sourland Mountain IBA adjacent to the PennEast route,   the D&R Greenway Rock Hopper Preserve, has not been thoroughly studied, eBird records show the presence of several New Jersey listed species, NJ threatened Red-headed Woodpecker and New Jersey special concern species Wood Thrush, Veery, Hooded Warbler, Kentucky Warbler, and Worm-eating Warbler. The preserve contains areas of high quality Spicebush thickets. Louisiana Waterthrush breed in the maze of small streams in the preserve. The streams crossed by the Yellow Trail are vulnerable to blasting from the PennEast pipeline construction. A more thorough breeding survey of this area is needed to determine the number of breeding pairs of Waterthrush. The USFWS Trust list species Fox Sparrow winters in the Rock Hopper Preserve. Barred Owls breed in low density in the Sourland Mountain IBA. One area of the Rock Hopper Preserve has good potential habitat for Barred Owl and should be surveyed. The Rock Hopper Preserve is a high quality habitat area of the Sourland Mountain IBA which needs thorough boots-on-the-ground studies, including detailed mapping of breeding birds and migration use.

The proposed PennEast pipeline route also crosses the Pole Farm IBA. Grassland species of conservation concern that nest at the Pole Farm are NJ threatened American Kestrel; NJ threatened breeding Grasshopper Sparrow and Bobolink; and NJ special concern breeding Eastern Meadowlark, Brown Thrasher, and Yellow-breasted Chat. USFWS Trust Resource List species Blue-winged and Prairie Warblers also breed at the Pole Farm. Breeding bird mapping surveys are needed to determine if breeding territories used by these species are affected by the proposed pipeline route. N J special concern species Northern Harrier and Short-eared Owl have winter roosts at the Pole Farm. Winter surveys are needed to determine if the areas used by these species are affected by the pipeline and its construction. NJ special concern species Vesper Sparrow has been reported during fall migration, raising concerns about the pipeline effects on migrating species. New Jersey endangered breeding and non-breeding threatened Bald Eagles have been reported at the Pole Farm throughout the year.   Their use of the Pole Farm need to be better documented.

The State of the Birds 2016 report lists 37% of North American birds at high risk of extinction without significant action, Red listed species, and 49% at moderate risk, Yellow listed species. In Eastern temperate forest 19% of 144 bird species are Red listed; in grasslands 27% of 45 species are Red listed. Important Bird Areas (IBA) are areas identified as significant to birds because of numbers of birds using them, endangered habitats, or rare species. Habitat loss, degradation, and fragmentation is the major cause of bird loss. IBA’s are what remains of significant habitat for many threatened species. Preserving the integrity of IBA’s is a critical first step to reverse the currently unsustainable loss of bird populations. The targeting of IBA’s for pipeline construction which will result in the further loss, degradation, and fragmentation of habitat. The route of the proposed PennEast pipeline crosses seven IBA’s with over 40% of the route in New Jersey going through IBA’s.   This is in clear violation of the USFWS guideline to avoid areas “avoid permanent habitat alterations in areas where birds are highly concentrated”. Interior forest breeding species and the forest they depend upon are especially at risk as it takes 100 years to restore forest habitat, assuming long term White-tailed deer control or exclusion. The draft EIS is clearly data deficient as a perusal of the eBird records for these IBA’s will show. A thorough year-round survey of bird populations in the areas affected by the PennEast pipeline is needed to determine which species are present at what times, with mapping of breeding territories of species of conservation concern especially needed. The data deficient draft EIS does not begin to address the environmental damage that will occur if the PennEast pipeline is built. 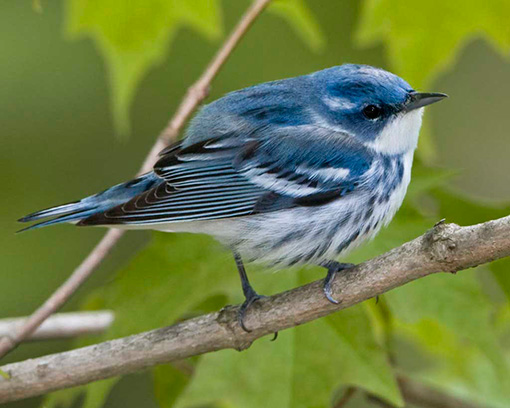 Rapidly declining Cerulean Warbler breeding at Baldpate Spring 2016. “The Cerulean Warbler… population has declined by about 70 percent in the past 40 years, making it one of North America’s most threatened migratory songbirds”—American Bird Conservancy 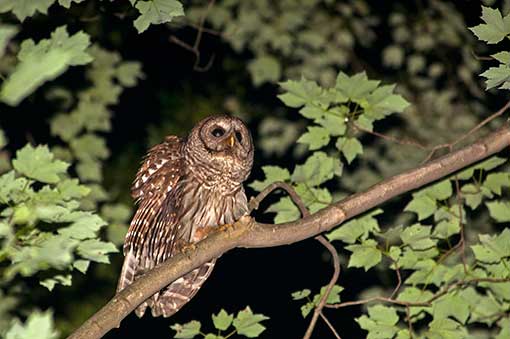 NJ State Threatened Barred Owl in the Sourlands © Tyler Christensen and reported at Baldpate in the breeding season. 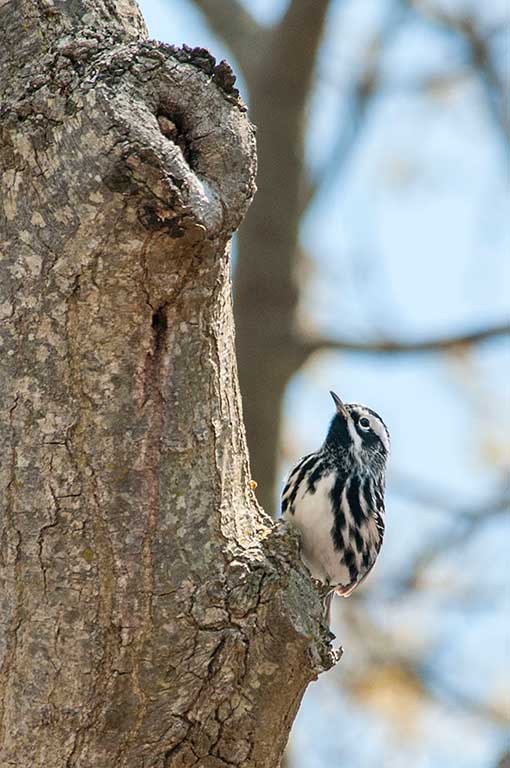 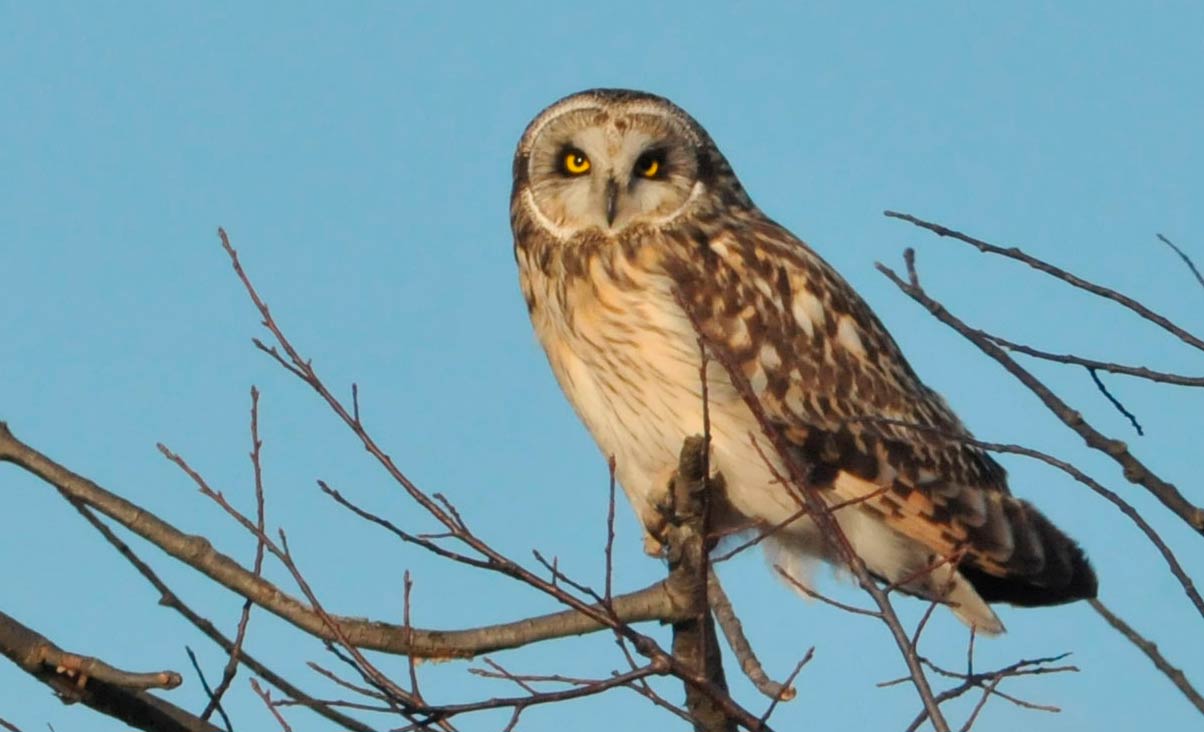 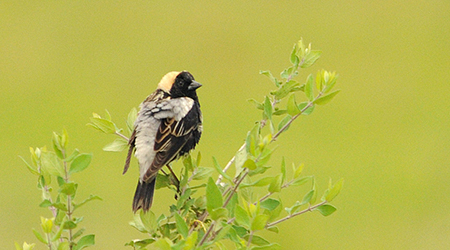 NJ State Threatened Bobolink (above) and Savannah Sparrow (below) are breeding grassland species found within or in vicinity of some of the Important Bird Areas (IBAs) PennEast proposes to cross. 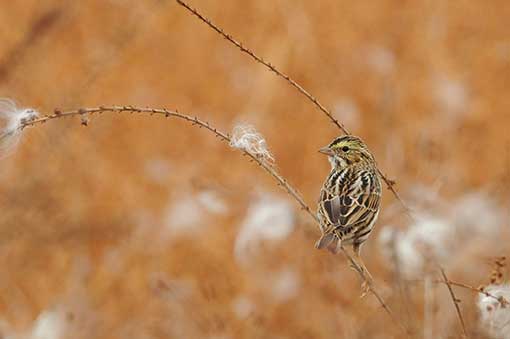 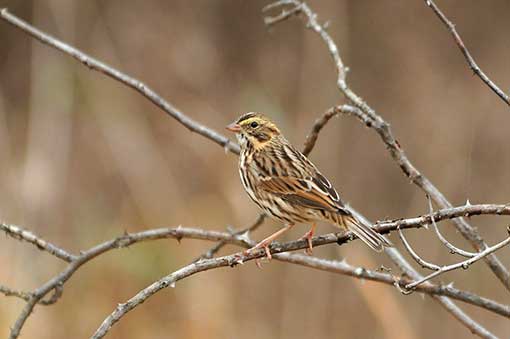 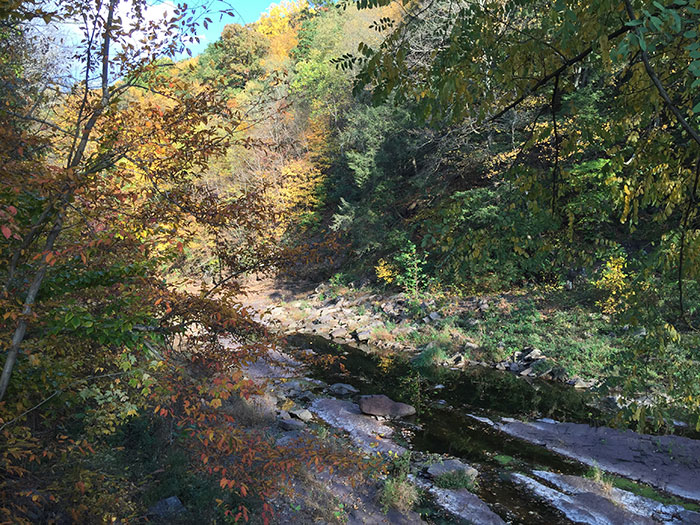 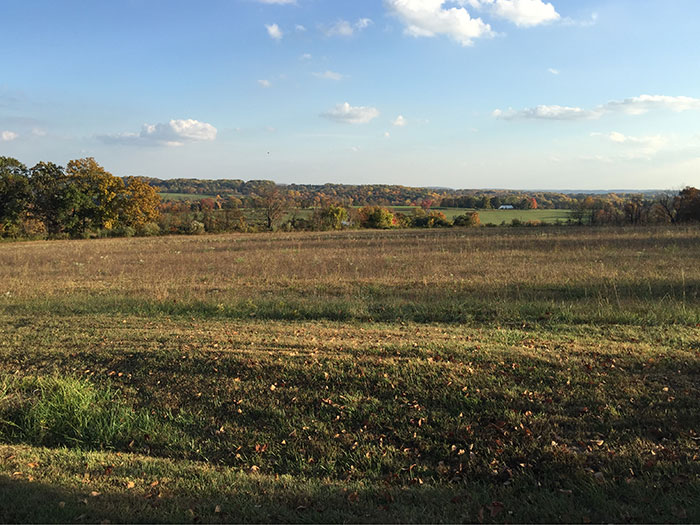 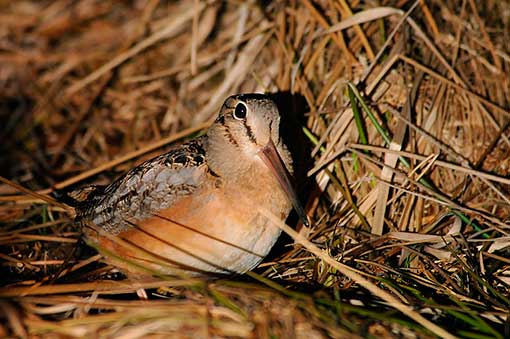 WCAS Comments on the PennEast draft EIS updated March 2017.docx
with tables and graphs (new PDF to be uploaded)